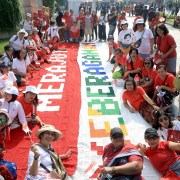 The simultaneous elections have ended, but they have left a frenzy and disputes. A group that claims to be the most moderate in the country is no longer able to display the tenderness and progressive spirit of Islam; it is trapped in political barriers and becoming intolerant. Many seem to be fighting for their spirit of primordialism based on political factions, rather than the spirit of nationalism.

During the presidential and legislative campaign period until polling day on April 17, security forces had managed to secure physical space but they never succeeded in reconciling virtual space.

These simultaneous elections have not managed to assert the next president, the votes for whom are still being tallied by the General Elections Commission (KPU). Whoever wins the presidential seat seems to be a vague figure amid truth claims of “quick counts” of pollsters and “internal counts” of the camps of the presidential contenders.

The elections have instead succeeded in blurring the spirit of diversity. The presidential election, in particular, has considerably affected family relations, friendship and national unity. One camp trumps up the threat of communism while the other raises threats of Indonesia turning into a caliphate, each claim intending to sink the electability of the incumbent Joko “Jokowi” Widodo and his challenger Prabowo Subianto.

It seems public space today, particularly as echoed in cyberspace, allows less discourse for equality and justice, and instead extends the space for discrimination against those who succumb to the rallying cries of each camp.

Many voices of devotees of tolerance and diversity have become silent, turned off by the dominance of partisanship.

Religious conservativism has merged into political ideological conservativism. Religious fanaticism has reached a universal definition; what it preaches is not a religion that many people understand.

Ideological space is now shifting; from religious ideology; moderate-conservative, transforming into a numerical ideology with symbols and political ideology jargon.

Digital space should contribute to expanding social space that we cannot immediately reach, so we could meet amid differences. But this cannot happen when the other is accused of being an infidel and not having common sense.

Intolerance and exclusivism are being increasingly crystallized to be more extreme than any ideology. There must be a way out.

The epidemic of political extremism must be stopped through the instilling, again, of noble values of tolerance and inclusiveness that depart from our ancestral heritage, progressive understanding of religion and based on the philosophy of the Pancasila.

The writer is program and advocacy manager at Rumah Kita Bersama.

Disclaimer: The opinions expressed in this article are those of the author and do not reflect the official stance of The Jakarta Post. 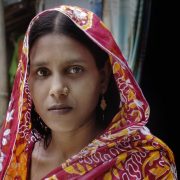 Sharina* and Nazir met for the first time on their wedding day.

Sharina was just 14 and Nazir was 17. Their decision to marry was not theirs to make. Instead, both of them were forced into marriage by their families.

Every year, 13.5 million children under 18 are married, with many having little to no say in the matter – and of that number, 12 million are girls. Child marriage is a serious human rights violation that often cuts short a girls’ education and increases her risk of experiencing physical and sexual abuse, as well as health problems.

It won’t be easy – but ending child marriage is possible. Plan International has been working tirelessly across many countries and for many years to help end child marriage through powerful partnerships with parents, lawmakers, community leaders and especially youth.

Through our work, we encounter many former child brides – Sharina is one of them. Now she shares her story of being forced into marriage at age 14.

The story begins with my father. It was my father who suddenly one day took me to an old man who was visiting our village. At the time, I did not know this old man was the grandfather of the man who would soon become my husband. I also didn’t know that this “meeting” was to showcase me as a potential bride.

It was my brother’s wife who told me what was really going on. I was scared. Me – married? I was desperately sad and began to cry. I had no desire to get married.

After I was chosen as the bride for the old man’s grandson, no one talked to me about what was going to happen. At the same time, I dropped out of school.

The reasons I dropped out were partly economic, since my parents did not have much money for education, and because my best friends had also dropped out.  I was very fond of my friends and happy in our village. The thought that I had to marry and move to a place far away without anyone I knew was awfully painful to me. I did nothing but sit inside and cry.

My family travelled to meet the man who would become my husband, but I never met him – not until we were married.

The night before the wedding

The “gaye holud” is an important part of wedding traditions in Bangladesh.

It’s the night before the wedding where guests congregate while the bride is adorned for the wedding. An important part of this tradition is smearing the bride in yellow turmeric which brightens and softens the skin.  Another tradition is for the groom’s family to bring gifts for the bride – they gave me a yellow sari to wear for the ceremony.

For a bride, the holud should be a feast and celebration but I just cried. I sat on a straw mat in front of all the others, in my yellow sari, while I was decorated with yellow flowers in my hair and around my neck. Henna tattoos were also drawn on my hands and up my arm. Thoughts flew through my head – “Was it really happening now? How could it be?”

A wedding should be a happy moment but this was tragic. I knew I was too young.

The wedding party started at 10am with the whole village present. While the party was going on outside, I sat alone in my room. The neighbours teased me, crying outside the door, “Here comes the groom!”. Each time it happened, my heart jumped and I felt like I could not breathe.

I looked down at all times during the formal session of the ceremony, it would be over when I said “kobul” – a confirmation that I consent to the marriage. But I refused to say it. This made my family angry and everyone shouted that I had to say it. They said I was being disrespectful. I had no choice. I said the words and not once did I look at the man I was forced to go away with.

The beginning of a new life

Nazir, my husband, had also been forced to marry when his mother could no longer manage to care for him. She had shown him my picture and told him that it was now or never.

As we drove away from my childhood home, we did not say a word. When I finally glanced at him, I thought he was not handsome. I did not like the look of him. The tears came back and finally I fainted.

In the first days, we hardly spoke. The tone between us was formal and brief. He eventually asked me to be less formal but I told him that I wanted to go home. He said we were married now. He was kind and understanding but said I had to realize this was my life now.

Today, the relationship between us is much better. A few months after the wedding, I was seriously ill and bedridden with a fever. Nazir sat with me every night, put wet cloths on my forehead and took care of me. He said he loved me. He was very afraid and said he would rather die than lose me. After that, my feelings towards Nazir began to change.

When I fell pregnant, it was Nazir who took care of me. When Tonni, our daughter, was born, Nazir was so happy. He had wanted a daughter and was so proud. I was surprised the first time I saw her. She was so pretty.

My daughter and her future means everything to Nazir and I. Our greatest wish for her is that she will study and get an education – something we never had. Nazir’s wish is that she will become a doctor.

Together, we’ve agreed that we are never going to make the same mistakes our parents made – we will NEVER marry off our daughter.

Around the world, ‘normal’ for too many girls is facing roadblocks that challenge their power, freedom and equality just as they enter womanhood. Child marriage is an extreme example of such a roadblock, and one that often forces girls just like Sharina to drop out of school and become mothers before their young minds and bodies are ready.

Plan International Canada is calling on Canadians like you to stand with girls like Sharina to Defy Normal and help end child marriage. Together, we can support girls in becoming empowered, confident women who decide their own futures.

*Name has been changed to protect identity.