In many studies on child marriage in Indonesia, economic motivation is said to be the major driver behind this practice. This premise is not completely misleading. However, I once met a teenager who wanted to get married because she felt sinful after hanging out alone with a boy who was not her muhrim or closest family.

In another case, a girl “insisted” that her male friend marry her after they exchanged several text messages. Deep in her heart, she liked this boy, but she feared exchanging text messages could lead her toward “unwanted feelings and behavior”. Getting married therefore became the only solution for her to express her affection toward the opposite sex.

After the lovebirds got married, she and her “husband” promised to refrain from having sexual intercourse until they both graduated. They still live separately in different boarding houses and only meet for dinner. Her “husband” is not yet able to support her, as his own daily needs are still covered by his scholarship. But she said proudly, “this is what I call ‘dating after marriage’.”

Cases such as those aforementioned, involving 17 to 20-year-olds in my encounters, do not occur only in small villages or remote areas. Such cases also occur in urban areas, at universities and in educated, middle-income Muslim society.

To these people, the body, particularly women’s bodies and sexuality, are alarming. Women’s sexuality leads to worries about the many horrible things that could possibly happen. Women are not allowed to express their sexuality in any way outside the institution of marriage. They have tried to limit their contact with the opposite sex by covering their heads and avoiding any skin contact. But even using hijab is not enough. They need more assurance.

People learn these viewpoints and believe them as truths taken from various sources, including religious texts and references. These views often apply a purely textual approach in interpreting the texts and neglect the context in which they arose. This approach constricts their imagination about social interaction; anything related to male-female relationships is forbidden, except as legally avowed through marriage.

Furthermore, within circles holding such beliefs, marriage is used as a means to legitimate subordination of women, and even their repression. Women are not allowed access to contraceptives because, in their view, family planning is not in line with sharia. Furthermore, their religious beliefs also call on them to multiply the Prophet Muhammad’s followers by giving birth to as many children as possible.

Their desire to fulfill God’s command is commendable, but the gender division of labor and women’s continuous reproductive work are the consequences of this imbalance in gender relations.

For girls, public space excludes them and is male-dominated. For example, when a girl gets pregnant and gives birth, if she is still at school or university, she will automatically take maternity leave for at least one semester, or simply drop out. She will gradually stop being involved in student organizations and will not be allowed to socialize, except perhaps for running household errands. The husband, on the other hand, continues at school or in his job, and all the domestic work is handled by his wife.

The cases above indicate that textualist religious viewpoints are very powerful in legitimating child marriage. Typically, children do not have a voice in decision-making. However in a few cases the girls insist on an early marriage by persuading their parents using religious texts and references.

Follow-up studies are needed to further explore the religious views and interpretations used to encourage child marriage. Our research outfit, Rumah Kita Bersama ( Our Collective House ), has initiated this effort by publishing a guide to religious texts on child marriage, Fikih Kawin Anak. However, further support is still needed from a more progressive Islamic perspective to counter prevailing arguments.

Surely every marriage is supposed to bring about virtue and harmony. However, when a marriage is not supported by equal rights between husband and wife, marriage always becomes an arena of subordination which pushes women into the domestic space, with increasingly unbalanced gender and power relations.

Indonesia is a vast country with numerous languages, cultures and ethnicities. It should not surprise us that discussions about Islam reflect the complexity of the country. In spite of this diversity, authorities on Indonesian Islam agree that several distinctive features set it apart from Middle Eastern Islam. According to Azyumardi Azra, Indonesian Islam is firmly embedded in local cultures, and the state is democratically governed under the common ideological platform of the Pancasila model that in principle sanctions the full legal presence of Christian, Hindu, Buddhist, Confucian, and Bahai communities.1 Furthermore, a distinctive feature is that for nearly half a century the majority of Indonesian Muslim leaders have allowed women to hold religious and secular leadership roles. This development is also discernible in various mainstream Muslim organizations of which Nahdlatul Ulama (NU) and Muhammadiyah are the largest, and “can be seen as a perfect representation of Islamic-based civil society.”2

Simply put, the prevalent opinion is that Indonesian Islam is not Arab and never will be. Yet, when in 1998, the Suharto regime fell and the country’s political system became more democratic, Islamic movements whose main goal was to align Indonesian Islam more closely with interpretations from Middle Eastern Arab countries started to influence the country’s public life. The new-found democratic freedoms not only allowed for a pluralization of Islamic ideals, but also led to a fragmentation of religious authority. Communal boundaries were redrawn and relatively small numbers of extremist Muslim thinkers disproportionately influenced the creation of new laws and Islamic regulations. New political and religious actors emerged, all presenting new possibilities for what Hoesterey and Clark referred to as a glorious Islam “in the abstract.”3 In this crowded landscape, women, their bodies, roles, and rights became the symbolic bearers of how the abstract should be translated into reality.4

This new religious reality begs the question as to how Muslim feminist activists belonging to the mainstream organizations of NU and Muhammadiyah negotiated some of the sweeping changes in religious attitudes. While feminism comes in many forms, in this context I refer to Muslim feminists; women and men for whom the key to women’s liberation is found in re-interpreting the Qur’an and other Islamic sources (for example the Tradition or Hadith) from the perspective of gender equality. Their reference point is the belief that the sources for women’s liberation are the Muslim holy texts, but that these have been misread and abused to subordinate women.5 In Indonesia, feminists, Muslim or not, fight several battles against multiple forms of injustice perpetrated against women. Among others, they address issues connected to domestic violence and other forms of violence against women such as human trafficking, women’s reproductive rights (including FGM, Female Genital Mutilation)6, polygamy, unregistered or secret forms of marriage (nikah siri), child marriage (pernikahan di bawah usia, or pernikahan dini), and women’s public and private leadership roles.7

In this essay I focus on the strategies developed against the practice of underage or child marriage by the non-governmental organization Rumah Kitab (Rumah Kita Bersama). The rationale for this choice is that the practice of child or underage marriage touches on several of the main priorities of the Muslim feminist agenda as it includes the issues of secret marriage and polygamy. Furthermore, in Indonesia and many Muslim majority countries it is a brazen infraction of state marriage laws that impose a minimum age for women and men. Underage marriage is a form of violence against women, it threatens a girl’s (reproductive) health, and is often performed in secret as by necessity
it remains unregistered. In many instances the child bride enters a polygamous union.

According to the 2015 report by Coram International, 7.8% of Indonesian brides were 12-14 years old and 30.6% were 15-17 at the time of marriage (according to Indonesian law, the minimum age for girls is sixteen and for boys, nineteen).8 These numbers are higher than the numbers given by Unicef in 2014 that estimated 21% of Indonesian women between the age of 20-24 to be married before the age of eighteen of whom 3% were under the age of 15.9 The practice is mostly driven by socioeconomic factors such as poverty and local customs. For example some areas perform so-called “hanging” marriages (kawin gantung): a girl child is officially married but sexual relations are postponed until she has reached maturity. Child marriage is also supported by rigid gender norms that normalize male violence against women. Certain radical Muslim groups have promoted the practice as proof of Islamic correctness and a means to protect the bride’s honor. Some groups even present the practice as “cool.”

Get the full journal here: https://www.bu.edu/cura/files/2016/02/Boston-University-presentation-January-29-2016-van-Doorn-2.pdf 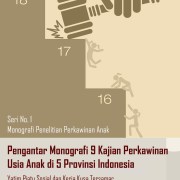 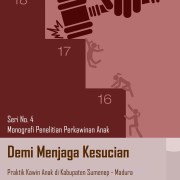 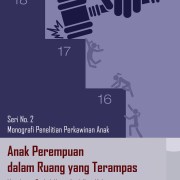