According to the 1951 Convention relating to the Status of Refugees, a refugee is a person who is outside their country of origin, have a fear based around reasons of race, religion, nationality, political opinion or membership in a particular social group, and because of this fear, they cannot or are unwilling to return to their country.

What made me interested to doing this project is that I want to know about their lives deeper, by knowing what valuable and memorable items they have brought with them during the journey to Malaysia to seek refuge.

The main challenge I faced was how to get closer to them. I needed to spend time with them so that they will feel comfortable with me and share their lives and begin to show their belongings to me. Another challenge is to identify the location of their settlements and the limited communication is a bit complicated to progress my project. Salimah Gafu, ethnic of Rakhine, 36 years old with her 9 years old daughter cloth. Her daughter lives in Myanmar with her relative. Somali women, Filsan Jama Muse holding her son. During her escape, she was pregnant with her son and gave birth in Malaysia. Osman Bilal, 31 years old, ethnic of Rakhine, Myanmar, with his engagement picture (second from right is his fiancee). His fiancee is now living in Myanmar. Tawhidah Mohd Ghafar, 18 years old, ethnic Rakhine, Myanmar, holding a plate of Thanaka (a traditional herb talc) that she brought from Myanmar and is for the used for the whole family before she came to Malaysia. Abdul Basik, 18 years old, with his slingshot. This is his favorite slingshot he brought from Myanmar. Osman Mohamad, 37 years old, ethnic of Rohingya, holding a Hadith book (collections of texts purported to quote what the prophet Muhammad said verbatim on any matter). He brought from Myanmar and always with him. 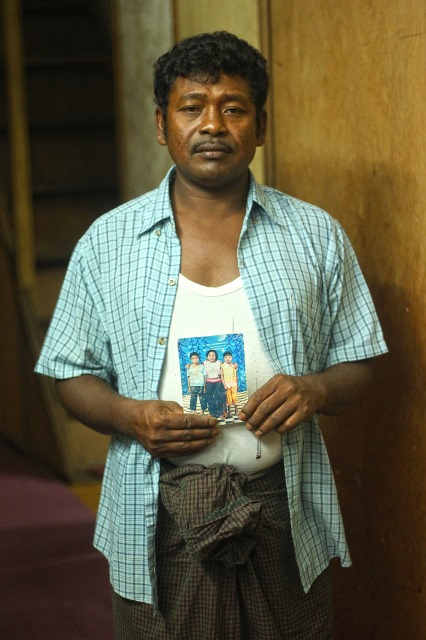 Mohd Ghafar Malik, 39 years old, ethnic of Rakhine, Myanmar, holding a picture of his kids. One of his sons is now in Myanmar and taken care of by his aunt. Somali boy, Bishar Abdisalam, 12, holding his shoes given by his father. Until now his father is believed to be lost due to the war. A Somali boy, Ali Abdisalam, 15 years old, wearing ‘Goa Shall’, a traditional Somali cloth. This cloth was giving by his father. Until now his father is believed to be lost due to war. A Somali child, Khafid Ahmed Khaif, 4 years old holding a toy that was taken by her mother during the escape to Malaysia. This toy is the only thing he loved, brought here. Somali women, Hawo Mohamed Abubakari, 32 years old, with her son, her only child. Shaban Amiruddin, 18 years old, ethnic of Rohingya, Myanmar with her slippers that she woreear to escape to Malaysia

Adi Safri is a photographer based in Kuala Lumpur, Malaysia. He studied Photography at a local University before working at a local newspaper and production house. He has covered a range of stories on Malaysian festivals and events. He currently works at The New Straits Times Press as an entertainment photographer.

Adi is took part in Exposure+5 and was mentored by Snow Ng.

Indonesia Enlists Female Clerics in the Fight Against Extremism *)

Ignoring Women Jihadis in The Ranks of Asia’s Islamic State a Fatal M...
Scroll to top